by Eliza Domingos ﻿and﻿ Blake Thomas﻿﻿

Click here to check out NASA's webpage on Jupiter

Jupiter is very cold. It can get as low as 234 degrees below Fahrenheit! BBBBRRRRR!Thats cold!
﻿ ﻿

Jupiter is made up of many different gases like Hydrogen and Helium. It has no solid surface, but is believed to have a solid core roughly the size of Earth.

How big is Jupiter?

The diameter of Jupiter is 272,945 miles around it's equator. You could fit about 1300 Earths inside of Jupiter!

﻿I don’t think you should go to Jupiter because there is no surface to step on and it can get really cold there. It is also in the outer systum so it will take a long﻿, long time to get there. The problem?...you might run out supplies and food. Also nobody has traveled there (except for robots), so it will be freaky and cold. Really cold brrrrrrr!

it takes 4332.59 days for Jupiter to orbit around the sun and 9 hours and 55 minutes to rotate on its axis.

1.The big red dot close to the center of Jupiter is a storm that is as big as three earths and it has gone on for hundreds of years.
2.Jupiter's amphospher is so strong it can rip appart robbats.
3.Jupiter's moons are all very dedliy and unice.

Jupiter has 50 moons with names, they are: 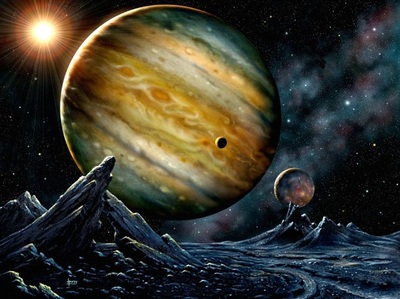